Barbara joined the RTLB service in 2004, following Special Education experience in Australia and the United Kingdom. She was based in Palmerston North and became renowned for her vibrant, fun-loving personality. In her work, she exhibited a proactive, innovative and persistent style in addressing the needs of young people in local schools. However, a very difficult, yet courageous journey with cancer resulted in her leaving her job in 2011 and returning to Sydney where she continued to celebrate life.  She passed away peacefully on 28 February 2014.

Shortly after, Barb’s parents instigated a fund to be used in her memory. To capture the essence of her love of adventure and her work with young people, Barb’s Bikes was born. Two tandem bicycles were purchased for access by local schools. They continue to present a unique opportunity for cooperation, fun and outdoor exhilaration for hundreds of students. 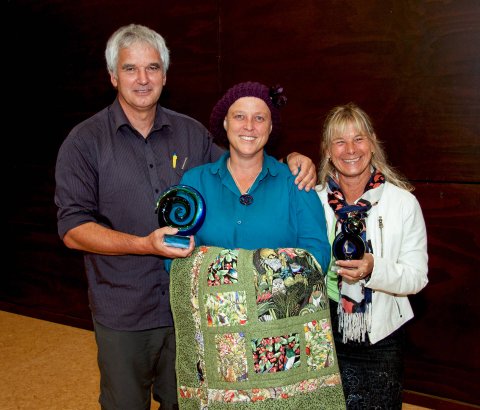 Barb (centre) at her farewell in 2012, with close colleagues Russell Leishman and Mary Chudleigh

Hariata joined Te Whiri Kōkō in 2012, but prior to that worked closely with RTLB in Māori immersion settings in the Horowhenua, Foxton and Ōtaki areas. She contributed greatly to our cluster, particularly in guiding us in te reo, Māori protocols and modifying and teaching us our cluster waiata. She was an active member of Runanga and a Practice Leader prior to moving home to the Gisborne region to be near whānau. In her new RTLB cluster, she again became a Practice Leader and contributed her knowledge and skills at a national level, from national advisory groups to Pouwhirinaki. Hariata passed away amidst whānau support on 29 May 2022.